On our arrival at Hash no 449, my dear Navy Mike demanded to know why everyone was late. The members present, a little confused, protested they weren’t, but the unusual early arrival of Lady Margaret and Squire John had totally thrown him; and I think his watch has been a microthripply out since the clocks went back – set him back years that did.

We were a jolly crowd, ready to enjoy a Hash laid by not one, not two, not three, but four hares!!! I use the term hares loosely. The official hares were Tom and Andrew, on their “farewell for now Hash”. Jo, our hare for a tricky section, had an exquisitely drawn map (OK, a few scrawls on the back of an envelope) so she took over at one point. But steering a steady course for us all was Alex, surely our youngest hare ever. Did I say hare?

Well, I think the poor chap has animal-lexia at present, as on the announcement that he was indeed, a hare, he told us all proudly he was a turtle. I was a little thrown as he had a zebra hat on. But it became clear later on that he sees animals differently from the rest of us – on seeing a trio of horses he delighted in the nice “cow” one at the back.

Back to the beginning. As befits an unusual hash with four hares, the standard marks were discarded in favour of those used by the Hashing fishermen of Uzbekistan which I’m guessing relies heavily on the Cyrillic alphabet.

But we managed despite the challenge and enjoyed the forbidden landscape of The Military College. Surely the wonderful autumnal landscape must rival Westonbirt Arboretum. Splendid mature trees in every shade of red, yellow and gold. Leaves everywhere, perfect for scrunching and rustling through. Totally stunning. We were treated to a perfect view of the beautiful old part of the College and resolved to attend the Music & Fireworks show in 2015. I hereby nominate Viv to organise it as she’s “well known” on the campus.

I don’t exactly know how the runners faired with the symbols. I looked up at one point to see them scattering about an open field so I suspect that was the fish hook. Or they were looking for the topless lady (you had to be there to understand). 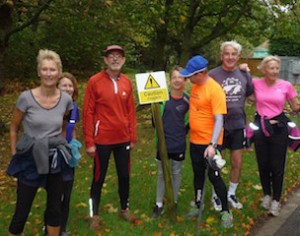 But the real treat of the day was, as ever, the après. And this was a good one. Brian made a touching au revoir speech to Andrew, and presented him with photos of the Ridgeway Relay he had participated in. He also returned the wretched rubber chicken to Andrew and we could tell he was thrilled. Then to young Tom, who was congratulated on a fine job as a hare, a punishment / treat was made to take part in a Hash “Down-Down”. He did so with good grace and never once flinched at the dreadful singing. He was awarded the shorts which will be given out next time in his absence. Tom, I hope you had time to wash the beer out of your hair before your return to school, don’t want you expelled.

So, dear readers, I’ve not given a lot of detail of the actual Hashy bit (too hard) but I hope I’ve given you all a reminder of a very special Hash. Aren’t we lucky so many nice people get together at once. Except David B – you weren’t very nice to Viv when you tried to get the guard at the gate to take her prisoner by telling big fat lies.

Thank you Andrew, Tom, Jo and the Turtle for a memorable Hash. Come back soon.

PS. Special Hashing get better soon wishes to poor Caroline who fell off a step ladder and broke her wrist whilst polishing the ceiling.