Dare I fail again? It was with some trepidation that I accepted the honour of writing up the events of the day, having previously receiving a minor tongue lashing from Navy Mike for failing to produce the all important record of hash 411. Anyway thank you to Mike for stepping in on that occasion and thank you to GOM for giving me the chance to redeem myself!!

The day started fairly grey and cold, but as usual this is was all forgotten as the hardy crowd of participants grew and the camaraderie developed to accept the challenge laid down by our hares, Viv and John. The route was set at around 3 miles for our walkers and just over 6 miles for the runners. Pre-hash warnings were relayed and related to the mud that we were likely to face and an apparently very stubborn gate that required the use of a ‘special tool’ to open it, this being a stone that was required to bash the gate catch open.

We were all waiting for Maurice to put in his usual late entrance, but sadly he didn’t make it; I did however overhear much speculation amongst the gatherers, that this was because the Irish Rugby team had, had, their grand slam hopes dashed by a truly dominant English side the day before. Crying into ones Guinness is a perfectly acceptable reason to ‘cry off’ in my opinion! 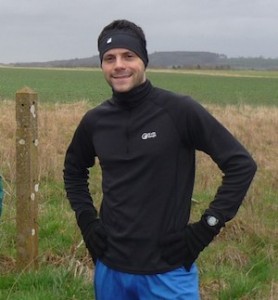 Anyway the hashers set off in an anticlockwise direction and took in a fairly convoluted route including a close up view of the principal local landmark being the wind turbines. There seems to be a very green theme running around Watchfield which relates to a green eco nursery, a green eco burial ground and the green turbines; Viv later mentioned a story of three friends who had all had a hand in these projects, apparently they all live next to each other somewhere about.

Back to the hash; and on the running front, the father, son and dog team Andrew, young Tom and four-legged friend led the field for most of the way until they had to dive off home due to time constraints. Our newest member Fiona on her first ‘running hash’ with KVH then took over the front (apparently Fiona had walked a KVH many years before); it was great to meet her and be dragged along at a pace that I could barely maintain. Apparently Fiona’s normal running distance is 3 miles, so stepping up to 6 miles in one hit is a great achievement. We look forward to Fiona coming to the next hash and hopefully becoming a regular in future

As had promised there was plenty of mud, but it was all manageable as the ground was generally fairly flat, I didn’t see any muddy bottoms and no incidents were reported. The hash was unusual in that the walkers arrived at the ‘circle’ decision points before the runners and therefore had to do most of the leg work, I was grateful for this as I was puffing out of my ears most of the way and could ill afford a detour. Navy Mike was out and about running the walkers route and ‘jangling the bells’ on the purple shorts he sported for the day.

Walkers and runners met up and synchronised towards the end of the route and so the crowd quickly came together back in the Eagle Inn. There was much applause when GOM raised a tribute to our hares, who had set a cracking hash considering the weather conditions and that they had to carry out some last minute diversions to their planned route. Mike passed the ‘jangly bell shorts’ onto (GOM apologies for forgetting your name) who promised to wear them at the next hash. Young Sam was noted in despatches for her bravery in completing the walk following her recent operation, and she said she is looking forward to running again in a few hashes time.

Always fearful of getting lost on one of Viv’s hashes, I must now eat humble pie and say thanks to Viv and John for laying a great trail, which was well marked, (except for the obvious diversion you might spot in the route map below. On On!